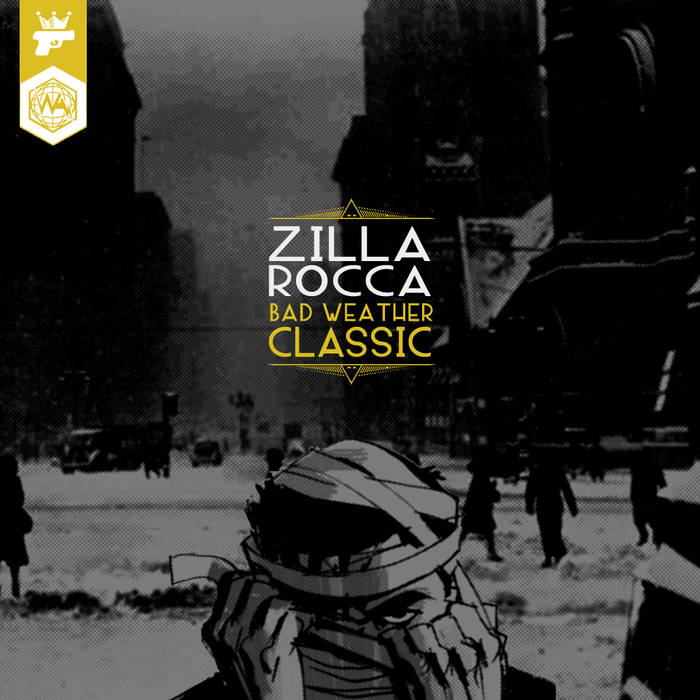 A hush falls over the city, thicker than the February snow and twice as heavy. From some dark place in that desperate sprawl, Zilla Rocca of the infamous 5 O’Clock Shadowboxers delivers his latest EP. This is a dangerous parcel, weighted down with seedy, visual lyrics and beats that cut closer than a two-bit shave.

These are the Bad Weather Classics.

So grit your teeth, and think of Philadelphia.

"This is some shit for train rides or table sitdowns, with half a bottle of whisky and deep thoughts/conversation. Intoxicating"--Khal, RockTheDub.com

"It’s stormy, wet cobblestone streets, upper level evil doer, getting ready to bomb music. Zilla Rocca‘s “Bad Weather Classic” maintains such a stark and violently pleasant sound with lyrics that don’t fail to impress with tales of running, loss, and pummeling opponents that will have you nodding like a madman while listening to it"--WhenGiantsMeet.com

"This is hip hop at its most murky: bad weather and baleful rhymes. Special techniques"--PassionOfTheWeiss.com

Mixed and mastered by Zilla Rocca at the International Dart Parlour. Philadelphia, PA.

Zilla Rocca: The #1 Bourbon General. The Career Crook. The Future Former Rapper. The man with a '96 Mentality. The owner of Three Dollar Pistol Music. The calm voice amongst the Wrecking Crew. South Philly's finest crime author.

Catch the chopper, deck a copper, sweat inside the metal locker
Always vodka, never opera (falling off the stage)
Mortgage due, so point and shoot, the choice is new
The boys in blue might fuck with me, I fuck with you (you're talking kinda strange)
The warning track, the hornet's back, don't forget your boarding pass
Horns to snatch, New Orleans cash (colors everywhere)
Clifton heights, I name my price, i cut the lights, so say goodnight
My blazer's tight, my paper's light (drunk without a care)
A lousy pimp, the bounty is, up to fifty thousand, shit
You counting it, you probably snitched (who could really blame you?)
Clean the plate like Akineyle, kill the beat or acapelli
Hanging off a Tiger Heli (nobody can save you)

HOOK
I'm hanging off the roof with one hand losing my grip
Track Name: Never Should I Lose You (prod by Zilla Rocca)
[Verse 1]
Never should I lose you, man say it ain't so
You blacked out on 95 the night of the show
I didn't know the state you were in, unsafe in your whip
I could've bounced and gave you a lift home
Bruised knuckles, a smashed frame, you lost control
Some whiplash, why'd you have to sip that?
Rain dropped heavy, heavy it dropped that night
The tow truck came with chains and a flash light
I haven't seen that bad since the Laff House
Even then, you made it home before you passed out
Just home from the war overseas
Glad to be back though it tortures your dreams
I don't know the pain you feel but I see it
At least it decreases when you receive treatment
I wanna see you carve out your own path
You treat me like the brother that you never had, thank you

[Verse 2]
Never should I lose you, baby say it ain't so
I watched you fall down, stayed away to let you grow
We played in the rain and slid on the grass
Scrounged quarters for the ice cream man, he couldn't pass by
Without getting something to spoil our appetite
You were this close from joining the after life
I almost cried at the sound of that
You almost died on your knees for a vial of crack
Now, fast forward a year or two, you're living proof
I wrote that last song with tears in the booth
Received praise as you made me a plate
You're so beautiful with no makeup on your face
Don't need it, I speak it, laid your secrets
To hold it all in is not brave, it's a weakness
I'm so amazed you're an artist who understands
It's good to reach out for another's hand, I got you

[Verse 3]
Never should I lose you, man say it ain't so
Taught me how to tell stories many years ago
The baby of the family, how sad to see
You taken prematurely, I was numb, I was a shorty
Didn't grasp it then, couldn't shed the tears
Heard the news as I was getting out my baseball gear
Face my fears playing wiffleball in the street
As your brothers and sisters shake and weep
The man who did it is gone now, rotting in hell
Killed himself inside his prison cell, coward
I was angry and powerless, I still am
To see life leave the body of a young man
And that was you, the smile, the curly hair
You lived upstairs, I felt safe when you were there
Your daughters are right here in your image
So even though you're gone you're still living, believe that
Track Name: High School Ring (prod by Small Professor)
[Verse 1]
Corner store closed, then it opened
Now it's owned by folks who look nothing like you, and it grows
Your mom's not home, your best friend is shady
Your girl boosts bad cardigans from Old Navy
Your neighbor's laid off and strung out
Your block gets snowed in and plow trucks don't come down
So what now, it's no frills, Save-a-lot
Your high school buddy's bartending, he never became a cop
His sister has an office job, she kissed you down the shore
Then married your man who takes bets on the side
No one travels cause everything is here
Parents at 19, no birth control, plenty beer


[Verse 3]
The smart ones skipped town, Hollywood, Virginia Beach
NYC, even Delaware provides relief
Went to school with many priests
They smoked cigarettes and cheered their favorite teams
Now they're up shit's creek
Dogs in backyards, cats in the alleys
Rich kids failed out and still drive Denalis
Time froze, you still the damn king
That's why you still wear your high school ring I get it